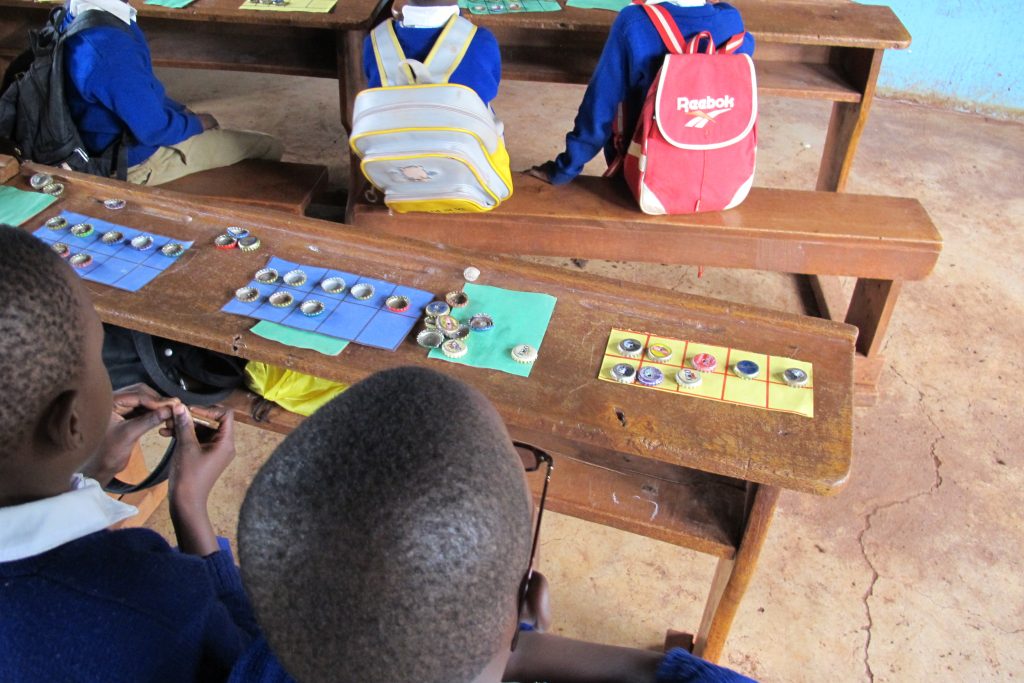 At the end of 2016 the Rössing Foundation team visited the Zambezi region. I had to organize a workshop for about 50 junior primary and pre-school teachers. We had to travel in one day from Erongo region to Zambezi region, quite a distance, fortunately we were accommodated in the Protea hotel, one of the best hotels in Katima.

The teachers are always quite keen to come for workshops, so we were quite happy to see each other since we had visited the region before.

When I address teachers I always want to get a feeling of the impact we have on junior mathematics education so one of my questions was: who is using the ten frame in class? I must be honest in admitting that I was disappointed when only 3 people showed their hand. Maybe there were more but too shy to reply. The teachers who rose their hand were asked to share their experiences and all of them were very positive.

The ten frame is a device that has long ago proven its value. It goes back about 5 decades and was first used in Holland in the form of empty egg containers. Elsewhere in the world the idea was copied but changed; somehow an egg box is not so practical; you have to fish out the bottle tops or stones one by one. So that is how the ten frame was born: a flat carton/paper with 2 rows of 5 squares.

In this format it is a crucial device for all learners to distance themselves from counting. Because computations and counting are at first close but later they are further apart. In the advanced stage of computation very little counting takes place, smart approaches in computations do not use counting procedures.

The ten frame is as well handy when it comes to the different ways it can be used. At first the bottle tops move a lot, later all most all learners can just look at an empty ten frame and imagine the numbers there. In the last stage it has made itself redundant; learners imagine the numbers only, they do not have to look at it.

The workshop in Katima went well; it was very hot that time so we were given a lot of drinks and I was quite pleased to see that a lot of teachers were collection bottle tops during the workshop. Hopefully those bottle tops are being used in a class room somewhere in the Zambezi region.